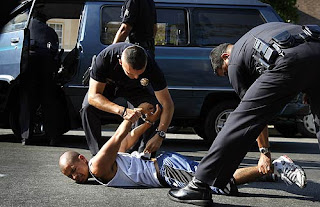 Racial Profiling has been a huge issue in the United States and still continues to be so.

Racial profiling is defined as the practice of targeting certain individuals based on the color of their skin.  An up to date example of racial profiling in today’s world would be after the attacks on the World Trade Towers on September 11, 2001 it has been reported that many Arab Americans, Muslims, and Asian Americans have been targeted at airports.  Just because Arabs were responsible for the attacks that day, does not mean that all terrorism via airports would be due to Arabs.  By assuming that the only terrorists we have to watch out for are Arabs, I feel like we are dropping our guard to others that will hurt us in other ways.

Racial profiling is a problem and should not be considered an active practice.  Still today some police officers use racial profiling as a means to serve and protect.  Some call it a hunch others call it racist.  Here is a short video clip asking the very question do police officers racially profile?  Let me know what you think.

How does one tell if someone is solely using race to profile someone or if it is strictly just an instinct or a "feeling" that something isn't right?  Would a police officer approach a white person in downtown Detroit at 3 a.m. walking the streets?  Most likely, but would you consider this to be racial profiling as well?  I would.  I feel as though racial profiling is used when someone doesn't "fit in".  We have all heard the example of the African American man getting pulled over coming home from the office in a brand new Lexus due to the fact that he simple didn't fit in.

Regardless of the situation racial profiling is wrong.  As seen above the majority of our states have no racial profiling ban, whatsoever, in place.  How can we, as future officers of the law change this?  Just because we are the law doesn't mean the law should not apply to us.  Sometimes the law isn't taken seriously because the ones that are suppose to serve and protect abuse it.  We as future crime fighters need to take a stand and figure out how we can change some of the issues that are so prevalent at hand.


Many racially profiling cases are never reported.  When the police are the ones that are breaking the law (at least the ones in the states that use bans) it’s hard to figure out who we are supposed to report these incidences too.  If possible you would get the officers name and badge number and report him or her to the appropriate person i.e., the sheriff or lieutenant.  Some people feel if one person is using race then everyone in that department must me doing it as well.  That’s not always so.  Just remember if one person doesn’t or won’t help there is always someone above him/her.

There are many reports and annual surveys in place to determine whether or not police officers racially profile.  My question to you as future crime fighters is what would you do if you saw someone racially profile, do you think this tactic is okay, and how are we to stop this from happening in the future?
Posted by Amanda Wilson at 3:40 PM